On a hazy summer morning, Sheila and I drive 30 miles to the east end of Canton, South Dakota to see a fence. The fence in the distance holds one of South Dakota’s most painful secrets. Located between the fourth and fifth holes of the Hiawatha Golf Course, the fence surrounds a cemetery where 121 Native Americans are buried who were held at the Hiawatha Asylum for Insane Indians. The only memorial is a large granite stone with a bronze plaque naming the individuals. The Indian Office decided that individual grave markers were too expensive.

The grounds of the asylum are now home to the Hiawatha Golf Course, a gun club, and a 4-H fairground. The cemetery is very close to Sioux Falls where I live. To get to the cemetery, Sheila and I borrow a cart from the local golf shop. We head out on a paved path, past the first hole, and over a little bridge. Then straight up the hill when we finally see the worn, weathered split rail fence in the distance, we pull over.  Signs warn the golfers not to play within the boundary of the fence. Black, red, white, and yellow strips of ribbon blow in the summer breeze. Each ribbon on the fence is left by tribal members to remember and honor their ancestors. The ribbons mark the four directions. 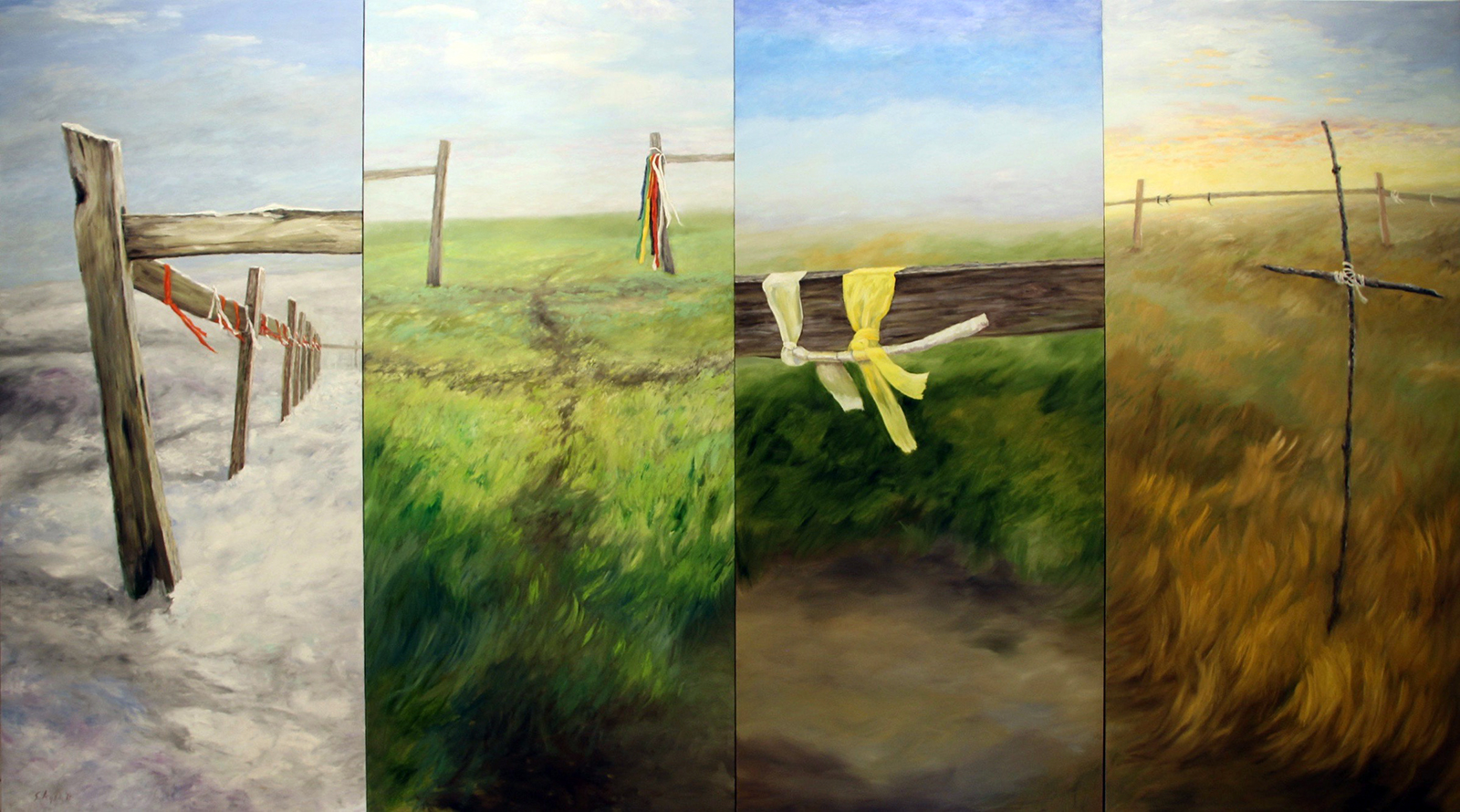 The Hiawatha Asylum for Insane Indians opened in 1903 and closed its doors in 1934. Some current researchers call the asylum the “little Dachau” of the Dakotas. The large brick building, with pointed roofs, a grand front porch, and a swing set on the front lawn, appears hospitable at first glance. But reservation agents once shipped hundreds of Indians from reservations to the asylum and warehoused them within its walls. Many inmates never saw their family members again.

The asylum’s first director had no medical background and in 1929 when the US government sent Dr. Samuel Silk to inspect conditions he filed a report:  “Three patients were found padlocked in rooms. One was sick in bed, supposed to be suffering from a brain tumor, being bedridden and helpless…a boy about 10 years of age was in a strait jacket lying in his bed…one patient who had been in the hospital six years was padlocked in a room and, according to the attendant, had been secluded in this room for nearly three years.”  Really, it was a prison, disguised as a hospital. It was a warehouse for the “crazy” Indians. However, few Indians were crazy; most were forced off the reservation and sent to Hiawatha because they were viewed as troublemakers by the Bureau of Indian Affairs agents.

Back in the early 1900s, railroad cars would stop at the great iron gate and fence so visitors could see the “crazy” Indians paraded in front of them. Approximately 374 Indians were brought to the Asylum; most could not communicate with each other because they couldn’t speak each other’s language. Women were strapped to beds, children neglected, and men left in their own filth. Chamber pots filled to the brim and were left in hallways to fester. When the asylum closed in 1934, the Canton Chamber of Commerce pleaded to keep it open because it provided revenue for the town.

I go to this spot two or three times a year. The juxtaposition of golf course with cemetery gives me the creeps. The US Government cared so little for these 121 inmates that they were buried en masse and never given proper funerals.

The proximity of the burial site only intensifies the horrors of its distant past. Would I have done anything differently than the residents of Canton did?  I come from Scandinavian ancestors who populated towns just like Canton, and I work at Augustana University where at least one of the buildings contains bricks from the original asylum. What would I have known about this place? Would I have heard the cries of those who came to find their relatives among the inmates?

Sheila and I walk around the faint outlines of plots where individuals were buried. Crosses made from simple branches strapped together with twine mark two of the graves. The deaths of these people are not shadows of a distant past. Family members visit every year to honor their loved ones. They are reminders to me of the present–of feeling the horrible dissonance of walking around a cemetery located on a golf course. We watch someone tee off. We take a few more pictures and decide to return to the clubhouse.

The fence recedes from our view as we drive away in our borrowed golf cart. The fairways are bone dry; we need rain to bring life back to the brown, brittle grasses. The house of the asylum’s superintendent has been moved and renamed the Newton Hills Lodge in Newton Hills State Park. It can be rented for large gatherings. Nothing but the cemetery remains to remind people what happened.

Listen to Confluences, by Gary Pederson, joining the sounds of Native American flute and the harmonica in both harmonious and dissonant ways.  It is based on the Hiawatha Cemetery painting and uses folk and hymn tunes to evoke both comfort and distress.