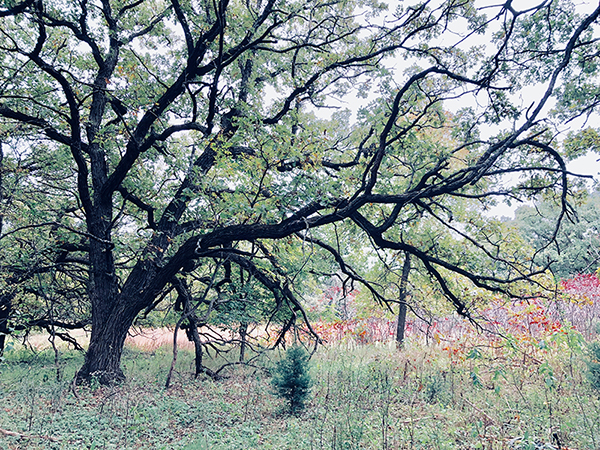 Alone in a field, the great tree spreads its branches in each direction. It has taken years to grow strong and vast. Its archaic frame tells a story of hardships, but its wide trunk and spiraling branches have grown into a testament of the perseverance of life. Surely, this tree is a zenith of God’s creation.

In the beginning, there was chaos, “the earth was formless and void.” The Word of God, desiring creation, spoke the realm of chaos into a world with structure. As a species which thrives off of order, we often mistake chaos as an entity to be avoided at all costs. I believe the tree has shown otherwise. In order for any living being to survive, it must operate according to the laws of the natural world. As the tree grows, it extends its branches to catch the rays of the sun. It reaches wherever there is light, and only to those places. In other words, the tree operates according to the law of the sun’s trajectory. And yet, if we look at the tree, its appendages spiral into a cacophony of disarray. It is precisely the presence of chaos in the tree’s form which provides it with the means to thrive. Yes, our world is filled with disorder, but in that disorder we have opportunity to not only grow, but flourish.

Is there a purpose to my life? Has God created us only to observe from far off? As I grow up, I continuously feel lost in the sea of existence, unsure of which direction to take. However, as I behold this tree, ever tranquil, I find my soul reassured. Its colors radiate life. Photosynthesis, one of the most complex processes in nature, feeds it. This bastion of life has no conscience. It remains in the same spot all its life. And yet, its very being glorifies God as its Creator. In this holy icon, I can’t help but think that the answer to life is simpler than it first seems. God, in His mercy, has given each being life in order that we may magnify him. So long as I praise God and seek his will, I have faith that I am fulfilling the greatest purpose I could ever achieve on this earth.

Magnificent tree, how is it that we humans, such intricate beings, could possibly be blind to the love of God permeating your core? Shall we ignore the beautiful blessing of freedom with which God has bestowed on you? Surely the power to expand without restraint is of God’s love for all creation. And yet you are empowered by God, sustained by Him at each moment, filled with life which comes from his Spirit. I will learn from you to rely on God each day as I head out on my own path and trust in Him to sustain me at all times as he does with all things.

Almighty God, I ask that you help us to seek meaning in You every day. Whether we are in the midst of tribulations or in the triumph of victory, may we always glorify You in our thoughts and in our deeds. When we find ourselves in a sea of chaos, I pray that we remember Your tree, ever stable, ever resilient in its course. And when our time comes, let us stand as a sign of Your power and glory in the hearts of men, until the day when we are united in heaven as Your beloved children. Amen.

Thomas Whittenburg is a member of the class of 2022. He plans on completing a
Biology/Religion double major.