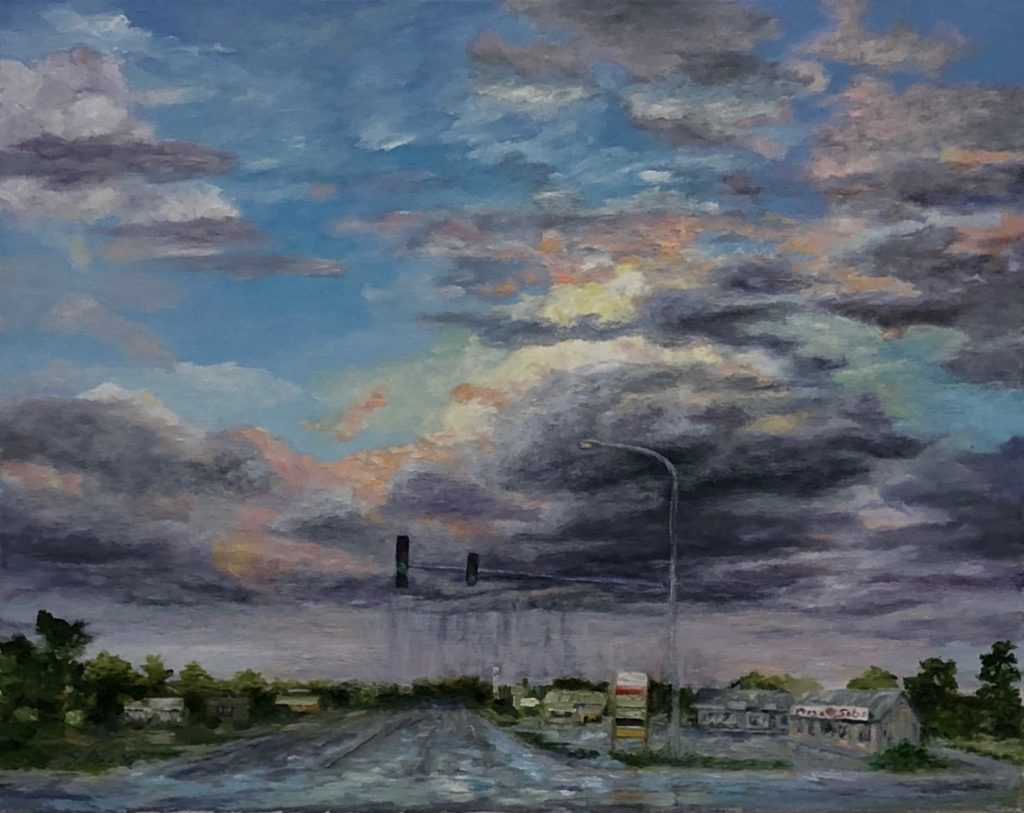 ask the plants of the earth, and they will teach you . . .”
from the Book of Job

“For everything there is a season, and a time for every matter under heaven . . . “ From the Book of Ecclesiastes

“While they were talking and discussing, Jesus himself came near and went with them, but their eyes were kept from recognizing him. When he was at the table with them, he took bread, blessed and broke it, and gave it to them. Then their eyes were opened, and they recognized him; and he vanished from their sight.” On the Road to Emmaus, From the Book of Luke

For everything there is a season:

A time for the pace of daily ritual, and a longing for adventure and spontaneity;

A time for comfort of the familiar, and a desperate need for the unfamiliar;

A time for home, and a time to go away and return.

The South Dakota seasons bring with them the rhythms of my daily life. Every fall, the summer’s heat and thick humidity sap my strength, exhausting my body and my spirit. Then the crisp air and cool nights of fall arrive, and I anticipate the deep snows of winter. By the next spring, I’m fed up with the howling, bone-chilling winds and straight-line snows that confine me to my comfortable golden brown chair by the warmth of the fireplace. When spring arrived this year, after a late April blizzard, my pulse quickened and I took to the open road. 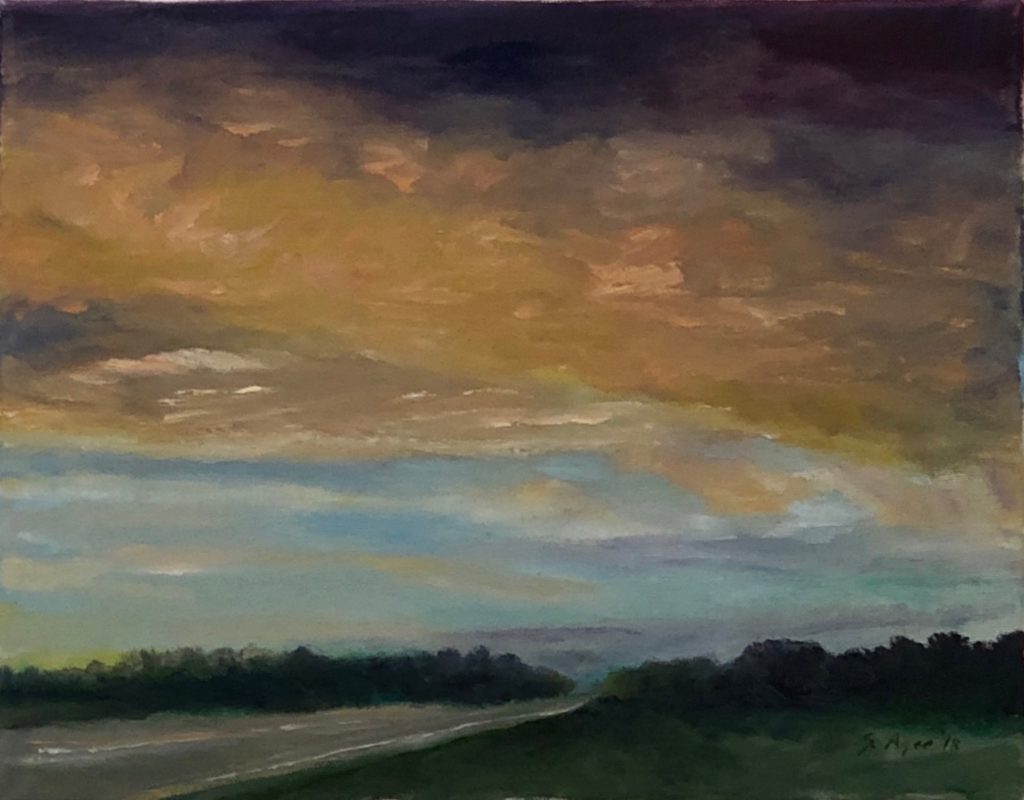 During these last months of my sabbatical year, two trips helped to counter the restlessness I carried within me from the long winter.  In May, my Goldendoodle, Byron, and I left for a week in the Black Hills. And then later in June I rode on the back of a tandem bike with my husband Gary, on RASDAK. (Ride Across South Dakota). Both trips led to adventure and to encounters with the unfamiliar.

I always head west because I grew up in the mountains of Montana and there I learned to behold the beauty of the creation.  My husband, still in the midst of his work as a middle school band director, couldn’t go with me so I asked Byron to join me. With his tail wagging, and our suitcases packed, we drove away in the gray CRV and headed to the Black Hills. On a spring day in May, we walked along the trails at Sylvan Lake, still covered with patches of snow. We shared a turkey and goat cheese sandwich and relaxed on the patio of Prairie Berry Winery. Bison and pronghorn ambled along as we drove through the wildlife loop in Custer State Park. Mountain bluebirds perched on the fence posts, their feathers matching the sky above us, and their soft call fading into the wind. Their brilliant plumage vanished before me into the browns and greens of the wide open prairie grasses.

I had planned to stay in the Hills for a couple of days and return home. I looked at the long range weather forecast in Montana and saw ahead days of sunshine and cool temperatures. We yielded to the spontaneity of the moment. I called my husband to tell him that Byron and I were not finished. We headed to Montana.

We stayed in Bozeman, my hometown, where we ambled by the quaint shops on Main Street on a warm spring afternoon. I stopped at a gourmet dog boutique and bought Byron some salmon treats. Later that evening, we drove to Sunset Hills and visited the grave of my father, who spent his life keeping airplanes safe in the sky. Large black and white magpies squawked repeatedly, their chatter interrupting the quiet of the cemetery. One flashy magpie, perching atop a granite gravestone, called attention to himself with his raspy, noisy call.

The next morning we headed up Gallatin Canyon to the West Entrance of Yellowstone Park toward our final destination–Old Faithful. On the way, we lingered on the banks of the Madison River, made swift by the melting snowpack. We waited for almost 45 minutes in a long line of traffic while bison crossed the road ahead of us, baby calves following the cows who weigh half the size of the 2000 pound males. At Old Faithful Byron and I watched a bus load of tourists line up to watch the geyser shoot its stream of steam into the afternoon air. By evening, we drove back through the western town of Ennis, by Norris Hot Springs, and returned to Bozeman.

The next morning I knew it was time to head home. We drove the 850 miles back to Sioux Falls. We were elated to see the Gary and Jack, the human and Standard Poodle in our family, but we didn’t promise them that we wouldn’t go west again before the start of school.

A few weeks later, I went on a completely different kind of road trip. I chose to ride on the back of a tandem bicycle with Gary across the prairies of South Dakota to Devil’s Tower in Wyoming. I split the days of the RASDAK trip between riding and sagging (SAG: to provide support and gear). We were part of a group of approximately 150 cyclists and saggers who love taking in the world at a different pace than the usual frenetic schedule of daily life.

When we started the trip, Lily Mendoza, a Lakota woman, gave us bundles of sage, wrapped with red yarn to carry with us.  As a member of the Red Ribbon Society, Lily raises awareness about the death of indigenous family members killed by violence. We carried the bundles on the route to honor someone in our life who had died. I carried mine in honor of Charlie Rasnick, an old prospector I knew when I grew up on Montana. He was the first one to teach me how to listen and learn from the rhythms of nature. On the day we rode from Union Center to Belle Fourche, we stopped at Bear Butte. Lily collected the bundles, her Lakota song resonating as the wind carried away the blessings she chanted. Whereas some Lakota burn sage as an act of purification, she secreted them away–they vanished.

Riding down an 8 percent grade at 38 mph on the back of a tandem bicycle heightened both the thrill of the ride and the simultaneous terror of falling off the bike!! Riding a bicycle intensifies my experience of everything around me: the confrontational power of 30 mph headwinds, the differences between the vibrant greens in the fields and trees, the welcoming song of the Meadowlarks and the Red-winged Blackbirds. Their voices encouraged me as I lost my breath and pedaled and pushed up yet another hill along the highway. This year, we ended our ride at the sacred Lakota site of Bear’s Lodge in Wyoming. The Euro-Americans settlers named it Devil’s Tower.

During other road trips, I often crank up the tunes of James Taylor or Pink from the library on my phone but on these two trips I longed to hear the sounds of the land and the rhythm of the road. Whether I was in my vehicle, or on the back of the tandem bicycle, the flute like song of the Western Meadowlark and the throaty call of the Red-winged Blackbird created a soundtrack that I took west. Cattle bellowed, their conversation punctuated the calls of the birds and the sighs of the winds.

According to Lakota tradition, the Divine Creator sent Meadowlarks to serve as messengers of good news. This spring my friend Janet and her family took the ashes of her sister to spread them on the virgin prairie of their ancestral home. As the ashes blew in the strong wind on a hot 100 degree day, Meadowlarks perched close by, piercing the sadness with the power of their prairie song. The Meadowlark sang the theme of her sister’s life: home, away, and home again.

A road trip with Byron, my canine companion and a bike trip with Gary, my human soulmate, led me to the rhythm of adventure and spontaneity and then to the rest and ritual of home. I listened to the songs of the birds, lingered in the rich aroma of pine trees on a hot day, and saw the shifting greens of fields and trees. I know the joy of the open road and the joy of returning home. Learning to listen is the key to seeing and knowing the rhythms of the open road.

Previous Post: « Veneration of Smell: St. Christina (1150-1224) The Astonishing and Byron the Doodle
Next Post: Vespers: Sails and the River »