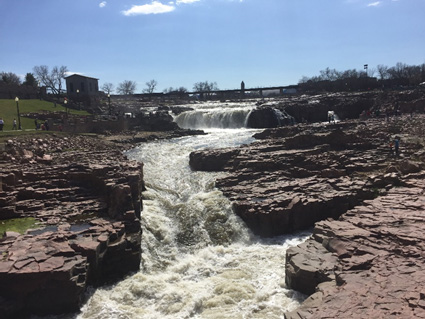 I could tell right when I got out of my car that something wasn’t right with the Big Sioux. The smell was strong, alarming me with the stench of sewage even far from the river’s shore in the parking lot. As I crept closer, the smell worsened almost repelling me from nearing the water, but I reached the river’s edge anyways.

Underneath the surface lies a barren wasteland of mud. Rocks near the shoreline are covered in a thin layer of slick slime, without a plant or creature in sight. I rolled up my pants and took my first step into the stream, carefully so as to not slip. My second step deeper was met with a gooey squish between my toes. With a third step, my feet began to sink and stick, making my fourth step a fight between me and the mud.

Beneath the exterior, the only movement came from the water. Not a single fish, nor weed, nor insect, nor speck of algae brushed past my feet as I stood in the stream. It was simply mud for as far as I could see, which frankly wasn’t very far considering how murky the water was. What is supposed to provide life and sanctuary to the surrounding environment has become lifeless. I would never know that all of this is hidden beneath the visual beauty of the Big Sioux. I would never know that the grimy, muddy residue left on my feet as I stepped back from the river had more meaning than merely having to wipe my feet before putting my shoes back on.

By Shannon McKnight
I am a sophomore Biology major from Farmington, Minnesota.