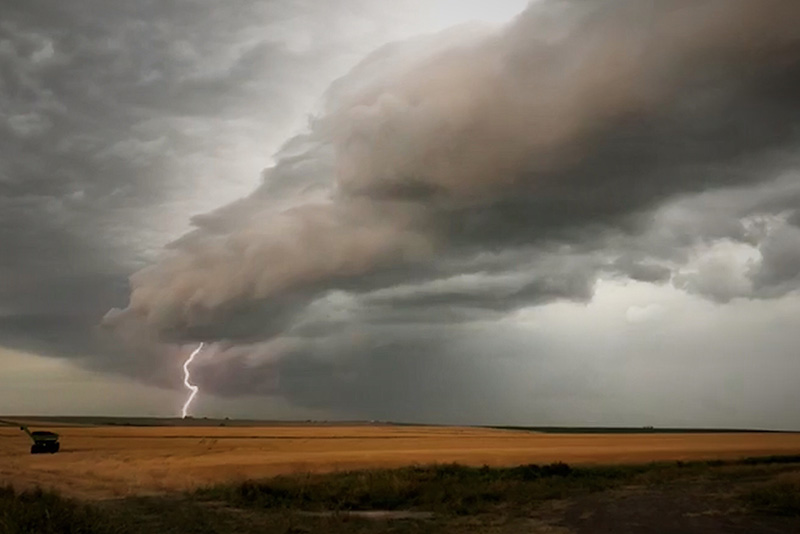 On July 12th this year, my father sent me a photo that made my jaw drop. In the photo the sky is filled with bulky, intimidating clouds. The luscious field of wheat stands strikingly yellow. In the field of wheat, a tractor is left motionless. Off on the distance a brilliant bolt of lightning pierces the fertile land of central South Dakota.

My dad, Carl Brakke, is a farmer in Presho, South Dakota, and he was out in the field that day. As the day went on, it became dark and stormy. My dad noticed how frenetic the lightning was, and he quickly took his iPhone out of the pocket of his usual store-bought jean shorts, that are worn all year round, and snapped this photo. I was impressed with how well my 53-year-old, sometimes-technologically-challenged dad captured the moment.

This photo was taken on my dad’s farm land south of Kennebec, South Dakota. A place that he has stood countless times, and where, on July 12, 2018, he stood and watched as his summer day of harvest was cut short. The storm may be a threat to the remaining crops, he said, but the rain is a gift that blesses the land and allows for further growth of those same crops. For farmers, the summer is a season filled with highs and lows. Droughts and tempestuous storms damage crops, but rain and sunshine help them prosper. Storms happen, and farmers must recognize them as a reality they cannot change.

“When storms roll in, I get a nice time to reflect,” says my father. Farmers put so much faith into the land and the weather to provide suitable conditions to raise crops and make a living off the land. Each year is variable, and farmers just must hope for the best. Faith is key to farming. You must believe that what is needed will be provided.

He has faith in the land because he knows that God is present everywhere on earth–God’s presence, much like the rain, has saturated the ground and everything living upon it. God has created my father, but God also created the earth and the land that my father and other farmers across the world utilize to grow crops. God provides farmers with a beautiful canvas of land filled with resources and assists them in taking care of his creation.

Storms may sometimes seem detrimental through the eyes of a farmer, but other times storms are a farmer’s best friend, and they get down on their knees and pray to God for rain. The storm on July 12 did not end up being damaging. Instead, it gave my dad the opportunity to reflect on how much the land means to him. He must hope for favorable weather and land each year and keep God close to help him navigate the day to day operations when faced with tragedies such as droughts and storms. My dad feels that his relationship with God is the most powerful when he is nourishing and harvesting the land that God provided.